Early epochs, what you should know.

×
About the "d" parameter
During the early epochs of the new Shelley era, a variable will affect the outcome of block production by independent pools.
What the d parameter represent is the proportion of the block that are made by the stake pool operators (such as BeBop), not the OBFT protocol managed by IOHK.
Right now the network is operating in a static and federated mode, so these IOHK’s OBFT pools are operating at for no profit whats so ever, just making blocks and upholding the network.

Now that the hard fork is done, all the logic is in place to turn on Ouroboros Praos, which is what Shelly is running under.
This is accomplished by setting d parameter to something less than 1, which means a percentage of blocks will be made by the Stake Pool Operators (SPO), instead of the OBFT nodes.
There are three phases to this and is determined by the value of d parameter. In the image below you can find the steps to bring down the value of d parameter towards 0.

All this will translate into lower rewards for the pools, and consequently for the delegators, especially in the initial phase. However, this situation should improve as the epochs pass.

We will have a new variable (let’s call it alpha α) that will act as a constant decay rate of the d parameter. Every epoch (where 1 epoch is 5 days), the value of d will decrement by the value of α marching towards 0.
For a more detailed explanation here is a video by Charles Hoskinson discussing this topic: https://www.youtube.com/watch?v=xiDHg-Ql2hU&t=8s 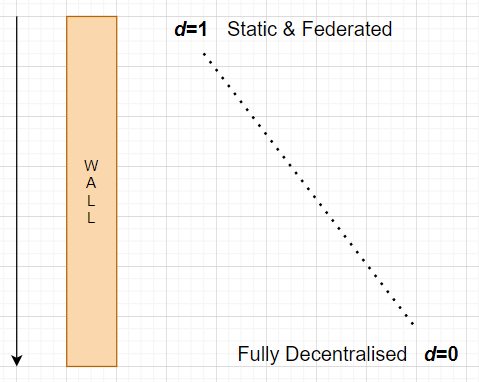 WHAT YOU SHOULD KNOW:
click to see more
LATEST NEWS:
next news

With a strong background in technology and security, our philosophy at BeBop ADA Pool is to be the most trusted and transparent Cardano ADA staking pool. To keep BeBop ADA Pool's services running securely, we have developed a fully resilient, scalable and highly-secure cloud based platform which operates globally to ensure maximum rewards for your ADA stakes.
Our team is dedicated and passionate about Cardano and strongly support the vision of a fair financial services for all.

BeBop ADA Pool is a Cardano ADA Staking Pool.
We are a friendly and passionate team that have developed a fully resilient, scalable and highly-secure cloud based platform which operates globally to ensure maximum rewards for your ADA stakes. We value the responsibility that comes with delegation and maximising rewards, whilst securing the integrity of Cardano’s network.
The team is experienced, committed and passionate about Cardano and strongly support the vision of 'fair financial services’ for all.
Cardano is a decentralised public blockchain and cryptocurrency project that is fully open source.
Cardano uses the ADA cryptocurrency, which can be used to send and receive digital funds.
Cardano differentiates itself by being designed from the ‘ground up’ to deliver a secure and sustainable ‘Proof of Stake’ blockchain that can protect user privacy whilst allowing for regulation.
ADA is the cryptocurrency on the Cardano blockchain. Holders can send value between friends, pay for a good or service, deposit funds on an exchange, or enter an application.
Founded in 2015 by Charles Hoskinson and Jeremy Wood, Input Output Hong Kong (IOHK, now IOG) is a world-class research engineering and technology company committed to using peer-to-peer innovations to provide financial services to three billion people that don’t have them. The group is contracted to design, build, and maintain Cardano through to 2020.
You can choose to stake to BeBop ADA Pool directly via the Daedalus and Yoroi wallets. There is no risk to your ADA when staking, ADA does not leave your wallet and you remain in full control.
The Cardano Foundation acts as a supervisory and educational body for Cardano.
The mission of Cardano Foundation is to standardise, protect and promote the Cardano Protocol and its applications.
Also as a community hub offering authoritative,
timely information about the technology and Cardano’s wide-ranging potential.
To liaise and influence government and regulatory bodies, form strategic partnerships with businesses, enterprises and other open source projects and aid the creation of formal software standards for Cardano, a crucial feature for its long term success and critical in adoption and government engagement. The Cardano Foundation’s core mission is to standardise, protect and promote the Cardano Protocol technology.